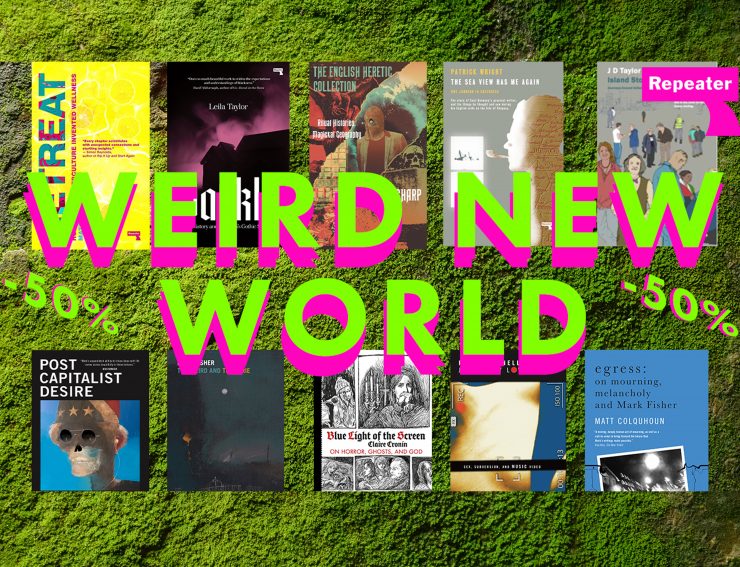 Haunted houses, bitter revenants and muffled heartbeats under floorboards — the American gothic is a macabre tale based on a true story. Part memoir and part cultural critique, Darkly reveals the heart of America’s darkness in the specters left from chattel slavery and the persistence of white supremacy.

“Does so much beautiful work to widen the expectations and understandings of blackness.” –Hanif Abdurraqib, author of Go Ahead in the Rain: Notes to a Tribe Called Quest and They Can’t Kill Us Until They Kill Us

Narrated in orbit of Mark Fisher’s death as experienced by a community of friends and students in 2017, Egress analyses Fisher’s philosophical trajectory, from his days as a PhD student at the University of Warwick to the development of his unfinished book on Acid Communism.

“A remarkable interlacing of ambitious theoretical enquiry and raw personal memoir, Egress asks why collective thought and practice today is so broken that it takes a lacerating calamity to rediscover something like community. This is a work of thought in motion and in emotion, searching, deeply wounded but undefeated.”– Robin Mackay, Urbanomic

In this popular and illuminating cultural history of the relationship between health and the counterculture, Matthew Ingram connects the dots between the beats, yoga, meditation, psychedelics, psychoanalysis, Eastern philosophy, sex, and veganism, showing how the hippies still have a lot to teach us about our wellbeing.

“A tender and corporeal autobiography of what it means to express yourself as a female musician when everything feels bound by the playful but taut restrictions of love, sex and power.”– Hannah Ewens, Noisey

Edited and with an introduction by Matt Colquhoun, this collection of lecture notes and transcriptions reveals acclaimed writer and blogger Mark Fisher in his element — the classroom — outlining a project that Fisher’s death left so bittersweetly unfinished.

“Mark’s unparalleled ability to infuse ideas with life comes across beautifully in these lectures. Throughout his work, he never stopped believing in and working towards an escape from capitalism – and this series of talks finds Mark weaving his way through working-class history, countercultural libidinal movements, and high theory in an unwavering effort to find just such an escape.”– Nick Srnicek, author of Platform Capitalism

Part countercultural history of England, part ghost story, and part magickal psychogeography, The English Heretic Collection is a darkly comical, urgently lyrical, mental escape hatch from the hells of our own making.

“This is an alternative England, one of decommissioned nuclear bunkers, abandoned villages and creepy public information films, an England where the shadow on the horizon could be a signpost but might be a gibbet.”– Stuart Maconie

The Blue Light of the Screen

“Blue Light of the Screen is a different kind of book. Cronin allows not just one voice to speak, but a legion of voices: critical but confessional, filled with dread and then a strange euphoria, marred by faith yet undermined by reason… This is critical theory as demonic possession.”– Eugene Thacker, author of Infinite Resignation, In the Dust of This Planet

The Sea View Has Me Again

In this study of the German Modernist writer, Uwe Johnson, Patrick Wright encounters and researches the clues left by Johnson in his own “island stories”; opening out to provide an alternative version of modern British history: a history for the present, told through the rich and haunted landscapes of an often spurned downriver mudbank.

“A monumental sifting and arranging of local particulars, stitched against the savage farce of a great European novelist’s elective exile… Patrick Wright has picked over the landfill of a very specific Estuary culture to devastating effect.”– Iain Sinclair, author of Downriver

– Available in ebook only

Island Story weaves histories, experiences and ideas to tell another kind of story: one of rebellion and retail parks, migration and inertia, pessimism and disappearing ways of life, and a fiery, unrealised desire for collective belonging and power. Think you know the island? Island Story will have you think again.

“If you want to know what Starkey, Fox, Bryson and Paxman miss, because they travel different roads, this book is for you.” – Danny Dorling

The Weird and the Eerie

What exactly are the Weird and the Eerie? In this new book, Mark Fisher argues that some of the most haunting and anomalous fiction of the 20th century belongs to these two modes.

“A fitting tribute to an author who had the rare capacity to write lucidly about dark and difficult things, to find a lexicon for the interstitial, the underground and overlooked.” – Roger Luckhurst, LA Review of Books