A neo-Isherwood – David Stubbs on Bowie, Englishness and masculinity 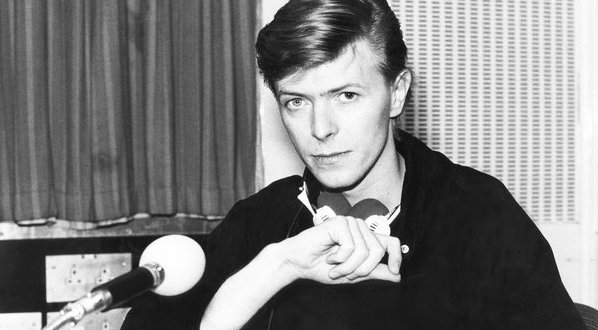 Guest post by David Stubbs. His next book, 1996 and the End of History, will be published by Repeater in 2016.

The first time I didn’t meet David Bowie was at a junior school village hall disco at Barwick-in-Elmet, the small village near Leeds, in which I grew up. This would have been in 1973, I guess. The polish of the parquet tiled floor lingers palpably in my distant memory, as do the sea of flapping corduroy flares and stomping pop sounds of the stereo system they’d wheeled into the hall. Chief among them was “The Jean Genie”. Pop meant everything to me then; I kept an exercise book in which I would list in different felt tip pen the Top 20 singles charts rundown each Sunday. If an entry had gone up in the charts, it was listed in green, if it had gone down, red; if it had held its position to me, grey. I felt distinctly the schism in the charts. There was the stony rubbish, the mouldering crooners who still held sway into the charts appealing to an audience some of whose tastes had formed in the Edwardian age. Oh, and there were The Osmonds and David Cassidy but they were for girls and therefore beneath contempt.

And then there was our gang, our gang. The boys. There was Glitter, of course, Slade, The Sweet, Bolan – but even I recognised that Bowie was the Queen Bitch of them all. And I wasn’t the only one. All us boys, all us little hard boys, thought Bowie was the cock. No more so than on the minimal “Jean Genie”, which, though we didn’t know it, harked back to a tradition that stretched to Muddy Waters’ “Mannish Boy”. All we Dennis The Menaces who were anti-Walter, anti-softie, loved David Bowie. He was the juvenile delinquent in extremis.

Apologies. It would be nice to report that he effected an epiphany in our young minds with his unabashed androgyny, his deliberate effeminacy, the way he put his arm over the shoulder of his guitarist on “Starman”. It would be nice to report that this sort of behaviour confounded the macho bully boys in 1970s English primary and secondary schools, but that wasn’t my experience. Somehow, it made him more über-male. After all, we were used to long-haired blokes; we had them on the wrestling every afternoon, blokes like Adrian Street; we had them running rings round defenders on Match Of The Day, blokes like Tony Currie, Charlie George and George Best. We didn’t really know what homosexuals were, with The Naked Civil Servant still round the corner in the mid-70s but we knew what puffs were and David Bowie wasn’t puff’s music. There was too much hard guitar, wham-bam percussion and fast, honky-tonk piano for that. Puff’s music was Donny Osmond. Your Granddad might think Bowie was some sort of nancy boy but he didn’t get it, did he?

Of course, David Bowie was implanting all kinds of ideas about maleness and being that would flower later but for boys my age, he was simply a magnificent pop animal with whom we could somehow identify and root for; he made the out of reach seem slightly less out of reach. He mysteriously and disappointingly ascended out of the glam pop orbit in the mid-70s for reasons we couldn’t quite understand. In his place came the likes of Alvin Stardust and David Essex, the sort of ersatz poppers who, unlike David Bowie, would do shows like Seaside Special. Sightings of Bowie became rarer. His value only increased.

Then came Cracked Actor, the BBC documentary about Bowie broadcast in 1974. I watched it avidly; even though I only had access to a black and white TV, Bowie’s presence seemed to colour up the screen nonetheless. What enchanted me most about this bizarro, glamorous, scary monster, diamond-hard rocking man’s man was that he was very much an Englishman. He spoke in the broad, affable vowels preserved from his South London upbringing; he was milkman-matey, even as he tottered around in stacked heels and multi-coloured, flesh-revealing androgynous garb. This impressed me deeply. You could be this and you could be English.

I later went through a phase of deep Bowie scepticism in which I dismissed this manner of Bowie’s as nothing more than a pretence of unpretentiousness, the empty tones of a poseur who had no originality about him, was merely the sum of his chameleon colours. I got past that, fortunately. Today, it seems clearer than ever that, despite his worldwide peregrinations, gender fluidity and shape shifting, Bowie was at heart doggedly English and that being male and English, this somehow meant a great deal to me, to a degree that is almost shameful.

You sense it at the very beginnings of his career; those flickering colour images on YouTube of him as a young, dapper mod, seeking out the camera’s eye. Or the huge influence exerted on him by Anthony Newley, who combined acting and songwriting and despite his jetsetting success was very much the dapper Englishman, a Bond-like international emissary.

Much is made of Bowie coming from Beckenham, as if it is an ironic absurdity that he should have come from a staid, South London suburb but I’m not sure if Bowie himself felt that way. He wasn’t quite JG Ballard, with his seemingly improbable and perverse attachment to his suburban semi-detached home but he kept on a large place in Beckenham as late as 1971. The extent of his fame, the mania and collective, pent-up existential energies it exploded on the world meant that he had no practical choice but to remove himself, place himself in exile, in New York, Switzerland. However, as interview footage with my ex-colleague reveals, he maintained at all times impeccable English manners and courtesy, well above and beyond the call of PR duty. There are countless anecdotes of encounters with him which reveal that his natural instinct was to be matey, helpful and egalitarian, rather than diva-ish or stand-offish.

Of course, he didn’t make England his subject, a la The Kinks or Blur. And, although he politely took a lifetime achievement award from Tony Blair at the height of Britpop in 1996, in which his contribution to British pop was eulogised, the strand of British music that was taking his fancy at that point was the progressive, futurist reconfigurations of drum’n’bass, not the retro homage of Menswear. And yet that attachment to England pops up all over the place, in small but telling places, whether it’s a photo of him on a train chuckling over a copy of the British-as-it-gets Viz magazine, or a picture of him taken in Greenwich Village, NYC on his 50th birthday by Kevin Cummins, in which he’s clutching a Union Jack tea mug and a fag.

Even when he was going through his Young American phase, despite the transatlantic vocal patterns he adopted, you always felt he maintained a consciousness that he was playing a (temporary) role, rather than lapse inadvertently into the faux-Americanisms of some of his peers. When he decided, as he unabashedly put it, to be the soulman, he made no bones about the fact that it was a premeditated pose, thereby avoiding some of the more embarrassing wannabeblack tendencies of 80s and 90s pop stars. And when he went to Berlin, he went very much as an Englishman, a neo-Isherwood, rather than someone determined to become an honorary Teuton. There was always that distance, that thespian consciousness. Finally, the very last photos of him see him just days before he died looking absolutely dapper in a perfectly tailored suit, a poignant echo of those early, Super-8 images of him as a mod about town.

Is this important? Surely the “essence” of Bowie is his existential departure from any sense of the “essence”. That you do not have merely to “be”, that you can become. However, I think of the words of my friend Phil Ramsden, who wrote that Bowie helped “to forge a new definition of what it meant to be a British man: something that wasn’t a City Gent or a chirpy Cockney or even a louche, lock-up-your-daughters kind of Jagger figure. Something that was a touch mysterious and non-self-explanatory.” That is important. The sliver of freedom Bowie on TOTP in the early 70s was one of freedom from a Britain still caught in the staid, repressive pall of a postwar Britain in which glimmers of a future beyond were relatively few and far between. Bowie wasn’t a departure from the dreary hegemony of English maleness so much as an expansion. Those of us who were male and English in his time are, in this respect, particularly privileged.