I’m not usually one for epigraphs. But I couldn’t resist adding one in the conclusion to my book Strange Hate: Antisemitism, Racism and the Limits of Diversity:

“All the world is a very narrow bridge, and the most important thing is not to be afraid.”
— attributed to Reb Nachman of Breslov (1772–1810)

I felt the quote was apposite because it captured the sheer difficulty of achieving an anti-racist acceptance of diversity. As I say in the book: “To live alongside the other is to live on a knife-edge, to walk on a narrow bridge. We are all of us capable of falling, and most of us will at some point.”

There was also another reason why I added the quote. I wanted to add something specifically Jewish to the end of the book in order to remind myself and readers that this is a book written by a Jewishly-literate Jew and that, while I range widely over issues of racism and diversity in the text, it was the issue of antisemitism that led me to write it. And so not only did I add the quote from Nachman of Bratslav, I included the original Hebrew as well. This is where things went wrong…

In the first printing of the book, this is how the quote appears in Hebrew:

And this is how it should appear:

Hebrew is written right to left. The quote in the book is written left to right. This is a common issue in preparing texts that mix English and Hebrew. I’ve encountered it in other books I’ve published.  While I supplied the correct text to my publisher, somewhere in the typesetting process, it reversed itself. The fault is mine: I didn’t spot the error through multiple proofreads. And I am a reasonably fluent reader of Hebrew.

The irony is both obvious and excruciating: A book that makes a passionate case for accepting Jews as they really are, and not as one’s fantasies would like them to be, cannot even reproduce a Hebrew text as it really is. If I haven’t already lost Jewish and/or Hebrew-literate readers by that point in the book, I may well lose them once they read the epigraph. Here is an open goal for critics: ‘the author of this book makes great play of his Jewishness, but he clearly can’t even read Hebrew.’ (This is on top of the fact that, in Jewish circles, this line is repeated and set to melodies so frequently that it is almost a cliché).

But there’s a lesson here too: This stuff is difficult. To speak Jewishly, to both Jews and non-Jews is indeed to walk a very narrow bridge. In fact, to speak publicly at all, in our fractious age, is to confront endless risks of causing offence and being misunderstood. The slightest slip of attention can bring ruin.

The text will, of course, be corrected in future editions. 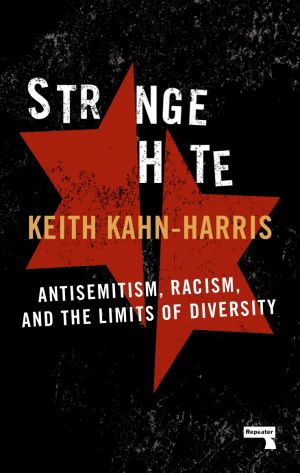 Strange Hate: Anti-Semitism, Racism and the Limits of Diversity is released on 9th June.

How did antisemitism get so strange?

In this passionate yet closely-argued polemic from a writer with an intimate knowledge of the antisemitism controversy, Keith Kahn-Harris argues that the emergence of strange hatreds shows how far we are from understanding what living in diverse societies really means.

Strange Hate calls for us to abandon selective anti-racism and rethink how we view not just Jews and antisemitism, but the challenge of living with diversity.