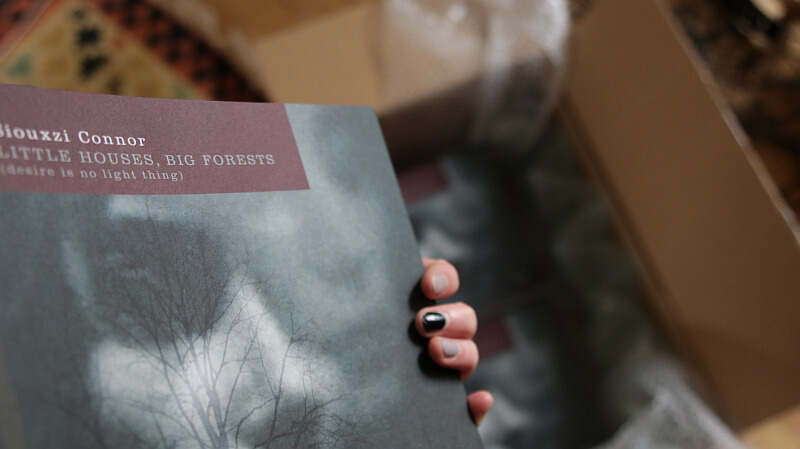 Repeater: What struck you about Susan Sontag’s diaries?

Siouxzi Connor: I felt like an invader reading these things but at the same time couldn’t pull myself away. I guess, in her personal life, the fact that she went through such a turn-around in her sexuality as well – publicly too.

Obviously, the public side of it was more or less towards the end of her life, not so much when she was at the height of her fame, of her productivity. But I could see this pain coming out in her dairies that I also felt with my own struggles with identity, struggles with sexuality or sexual identity, and knowing whether to make that topic apparent in my writing room.

Repeater: I’m fascinated by what seems to be a really strong strand in your art of this idea of a forest. Am I wrong in noticing that that’s a thing? If I’m not, what’s it all about?

Siouxzi: It really stems from my childhood. It stems from this acquired common obsession that maybe a lot of children have of always trying to visualize this sense of home. They might draw this little square with a triangle and a little pitched roof and show the little path and a picket fence sort of picture of home.

But for me, when I was a child, I was always drawing that with a forest around it, and it extended to when my brother, sister, and I were writing this little book together. I think we called it something like, “Our Place.” And it was just this repetitive obsession that we had, over the years, of our childhood, where we would sit, literally, in a little wooden house that our father had built us in the backyard, amongst all the trees.

We would sit there and my sister would draw and I would write about what this perfect place was that we wanted in our future, and it was always about this house, the forest, this horses we would have, and just these childhood dreams of a utopia in the forest.

I guess that obsession is just like most childhood obsessions when it’s in the background for many years. Then when I started writing my novel, I just couldn’t get it out of my head, and I literally started writing the novel in a wooden house in a forest in Finland and was flooded by this — I don’t know – feeling or this want for a utopia, again, like this house in the forest where everything is perfect.

All of the traditions and rituals of civilization are created within four walls. In the novel, this idea of utopia has so much to do with ritual, and how, even if there might be only two or three of us in an isolated place, we somehow create this rich culture, this rich set of traditions amongst us.

That proverbial space of the forest just keeps popping up in the novel and this book. To a certain extent it is in the films I’ve made too.

Repeater: I stumbled across this book a few months ago called Dreamtime: Concerning the boundary between Wilderness and Civilization by a German author, Hans Peter Duerr. What drew me to it was a search for some new way to think about freedom.

The book is very much focused on medieval religion, and the illicit rituals that persisted, and the taking of psychoactive drugs and things like that — things that were not socially permitted.

I wonder if for you when you talk about utopia it’s the same thing that I’m thinking of when I say freedom?

Siouxzi: Yes, the wilderness is somehow associated with freedom as well and, you know, just this dream of getting away from the city and having freedom from culture, which is impossible.

But using the wilderness as a space for freedom and this cultural element is coming in from the outside and reminding us of who they are. Reminding us that this freedom that we have built up in the forest is actually an illusion and freedom is somehow impossible.

Siouxzi: It also has something to do with the research that the book was based on – a lot of ecology and anthropology was filtered into it. I think the choice of having the big forest, little house, for example, is this idea of a our having a place in nature, and not living with this assumption of our dominance as a species—having this humility to think of ourselves or our culture as something that can be dominated by nature on a psychological level, and what that means psychologically to be dominated by nature.

Repeater: I got it. I think there’s also a sense of enough in that state as well. How do we preserve ourselves in a harsh environment, but not over-preserve ourselves? A little house is big enough.

Siouxzi: Yeah. There’s also this idea, this thread that keeps going throughout the book about being lost and being happy not to hold on too tightly to self-preservation. And this idea of building up this armor of culture around you, but to allow yourself to be “lost”, whether it’s physically in nature or whether it’s in any of the other ways that we can be lost. I think of it as a luxury. Going back to that idea of freedom, it’s the sense of being free in “lostness.”

One really satisfying thing about the book is that it brings together so many threads from my work, in terms of writing, but then also bringing together the visuals that I’ve been working on in the past as well. To have both of these worlds in one place.

Repeater: Actually, I did want to ask you about being a Polaroid photographer. Is that still accurate? Are these Polaroids?

Siouxzi: The images that are in here are not Polaroids. There are two layers, one is from a black and white 16mm film I did a few years ago. The other layers is 35mm color stills that I shot around Berlin last year.

Repeater: What’s the image on the cover, is that a random person from berlin?

Siouxzi: Yeah. It’s from a film.

Repeater: The figurative personal images are from the film and then the picture of the tree and the forest is the…

In this fourteenth and final instalment of Repeater’s short guide to radical independent bookshops, we spoke to John, Owner of Dreadnought Books in Bristol. What

In this twelfth instalment of Repeater’s short guide to radical independent bookshops, we spoke to Ana (she/her), Bookseller at The Calder Bookshop and Theatre in

Team Repeater select some of their favourite reads of 2021 in this festive end of year recommendation blog. Publisher, Editor and Author Tariq’s favourite reads:

In this fourteenth and final instalment of Repeater’s short guide to radical independent bookshops, we spoke to John, Owner of Dreadnought Books in Bristol. What

In this twelfth instalment of Repeater’s short guide to radical independent bookshops, we spoke to Ana (she/her), Bookseller at The Calder Bookshop and Theatre in

Team Repeater select some of their favourite reads of 2021 in this festive end of year recommendation blog. Publisher, Editor and Author Tariq’s favourite reads: