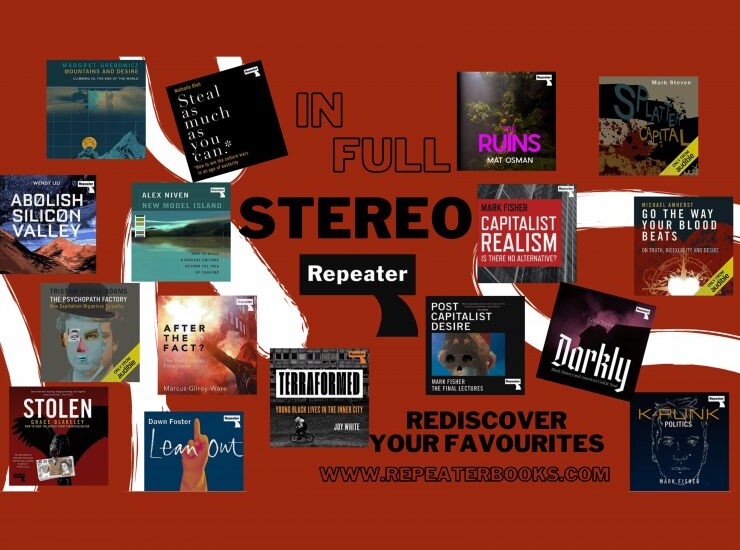 Whether you’re sound-scaping your commute, unwinding before bed, or making household chores a bit more colourful – a good audiobook can transport you to new worlds if only for a moment.

We love traditional print media, but we’re also passionate about making our books accessible for a wide demographic of both readers and listeners. All Repeater audiobooks are recorded and owned by us ourselves, so whilst they are accessible on Amazon (amongst many other audiobook providers) our readers and listeners will still be helping us despite buying through their platform. Here’s a selection of our new audiobook titles…

Edited and with an introduction by Matt Colquhoun, this collection of lecture notes and transcriptions reveals acclaimed writer and blogger Mark Fisher in his element — the classroom — outlining a project that Fisher’s death left so bittersweetly unfinished.

“Mark’s unparalleled ability to infuse ideas with life comes across beautifully in these lectures. Throughout his work, he never stopped believing in and working towards an escape from capitalism – and this series of talks finds Mark weaving his way through working-class history, countercultural libidinal movements, and high theory in an unwavering effort to find just such an escape.” – Nick Srnicek, author of Platform Capitalism

Covering the degradation of Everest, the banning of climbing on Australia’s Uluru, UNESCO’s decision to name alpinism an Intangible Cultural Heritage, the sudden death of Ueli Steck, the commercial and critical success of Free Solo, and the seemingly limitless power of K2 over the imagination, Mountains and Desire chases after what remains of this pursuit – marred by its colonial history, coopted by nationalistic chauvinism, ableism, and the capitalist compulsion to unlimited growth – for both climbers and their fans.

“A philosophical speed-climb, a topo map of our new Terra Incognita. I finished it grateful for a new sense of clarity.”– Kim Stanley Robinson

The Living and The Dead | narrated by Barnaby Edwards.

Examining the boundaries between the worlds of life and death, this text draws upon philosophy, ethnography, literature and natural science to suggest that life and death are best understood not in opposition but as continuous tendencies acting upon one another. Austin Locke argues that the failure to give nuanced consideration to the connections between the living and nonliving devalues both life and death. In doing so, he suggests, our ability to respond to the challenges of environmental degradation, technological advancement and the dominance of economic logic depends in part on more fluid understandings of the relationship between life and death.

“A challenging and intriguing counterpoint to the modern embrace of the static and the tangible.” – Foreword Magazine

Lean Out | narrated by Steph Bower.

Sheryl Sandberg’s business advice book Lean In was heralded as a defining moment in attitudes to women in business. But for all its commercial success, it proposed a model of feminism that was individualistic and unthreatening to capital. In her powerful debut work Lean Out, acclaimed journalist Dawn Foster unpicks how the purportedly feminist message of Sandberg’s book neatly exempts patriarchy, capitalism, and business from any responsibility for changing the position of women in contemporary culture.

“Rarely does essential reading really mean that you urgently need to read a book. But Lean Out is different.” – Danny Dorling, Times Higher Education

The Picture of Contended New Wealth | narrated by Tariq Goddard.

In the brilliant red doom of a Hampshire sunset, Brigit Conti can hear a voice behind her ears that is not her own. Bed-bound and complaining of a rare bone disease that no doctor can diagnose, her husband fears that the house they have purchased is a portal through which an older, more malign energy has passed, possessing his wife and son. Through their successive deterioration, his secular and agnostic world-view undergoes a metamorphosis, drawing him to a strange man from the hills: the Rector, their unlikely saviour. A gothic tragedy set in the 1980s, bringing proper characterization and a literary sensibility to the traditional horror story. Its mix of generic elements and mystical realism deal with the irreducibility of evil and its successful normalization in to our daily and dominant reality.

“Goddard’s eye is for irony and disaster, a potent thriller, driven by unravelling the neuroses of his characters as much as by uncovering the politics behind their predicament.” – Observer

After The Fact? | narrated by Mark Meadows

Marcus Gilroy-Ware shows us what really created the conditions for mis- and disinformation, from fake news and conspiracy theories, to bullshit journalism and the resurgence of the far-right, and why liberal newspaper columnists and centrist politicians are unable to turn back this tide.

Spanning politics, culture, psychology, journalism, and much more, After the Fact? is a timely wake-up call for those who believe we can simply go “back to normal”, and instead argues that, if we are to put an end to “fake news”, we must deal with the broader social crises that are responsible for it.

“Gilroy-Ware goes deep to explain widespread propagation of and popular susceptibility to all kinds of dangerous nonsense today. This is an essential contribution to understanding our current conjuncture.” – Wendy Brown

Ghosts of My Life | narrated by Tom Lawrence

This collection of writings by Mark Fisher, author of the acclaimed Capitalist Realism, argues that we are haunted by futures that failed to happen. Fisher searches for the traces of these lost futures in the work of David Peace, John Le Carré, Christopher Nolan, Joy Division, Burial, and many others.

“After the brilliance of Capitalist Realism, Ghosts Of My Life confirms Mark Fisher’s role as our greatest and most trusted navigator of these times out of joint, through all their frissons and ruptures, among all their apparitions and spectres, past, present and future.” – David Peace, author of the Red Riding Quartet

After 1989, capitalism has successfully presented itself as the only realistic political-economic system – a situation that the bank crisis of 2008, far from ending, actually compounded. Using examples from politics, films, fiction, work and education, Capitalist Realism argues that this lived ideological framework colours all areas of contemporary experience. But it will also show that, because of a number of inconsistencies and glitches internal to the capitalist reality program capitalism in fact is anything but realistic.

“Let’s not beat around the bush: Fisher’s compulsively readable book is simply the best diagnosis of our predicament that we have! A sobering call for patient theoretical and political work.”– Slavoj Žižek, author of Living in the End Times

A heartfelt personal story about the wasteful inequality of Silicon Valley and a rallying call to engage in the radical politics needed to upend the status quo which goes beyond the idiosyncrasies of the individual founders and companies that characterize the industry today. Ultimately, Wendy Liu proposes a more radical way of developing technology, where innovation is conducted for the benefit of society at large, and not just to enrich a select few.

“Lucid, probing and urgent. Wendy Liu manages to be both optimistic about the emancipatory potential of tech and scathing about the industry that has harnessed it for bleak and self-serving ends.” – Naomi Klein, author of On Fire: The Burning Case for a Green New Deal

This selection of essays from K-Punk: The Collected and Unpublished Writings of Mark Fisher (2004-2016) brings together the best of Fisher’s political writing. Ranging across topics from UK and American politics to communist realism, football, and depression, as well as including the unpublished introduction to what would have been his next book on acid communism, K-Punk: Politics shows Fisher at his most combative and incendiary, wrangling with the contradictions and complexities of capitalism and setting out the way forward into a more just, fair, and equal future for all.

From railway adventures to prosaic partying; as this Summer draws to a close, Team Repeater offer some of their favourite sunshine reads.   Josh The 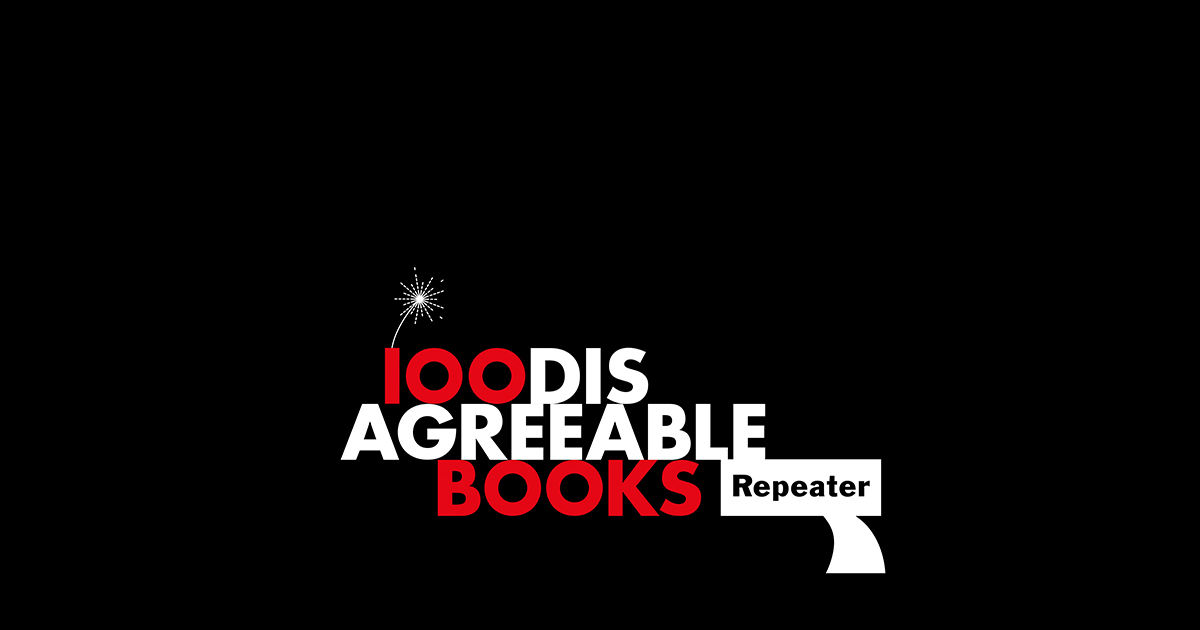 Back in July, we celebrated our 100th birthday (of sorts) with the publication of Cynthia Cruz’s The Melancholia of Class – a multidisciplinary polemic which

From railway adventures to prosaic partying; as this Summer draws to a close, Team Repeater offer some of their favourite sunshine reads.   Josh The

Back in July, we celebrated our 100th birthday (of sorts) with the publication of Cynthia Cruz’s The Melancholia of Class – a multidisciplinary polemic which