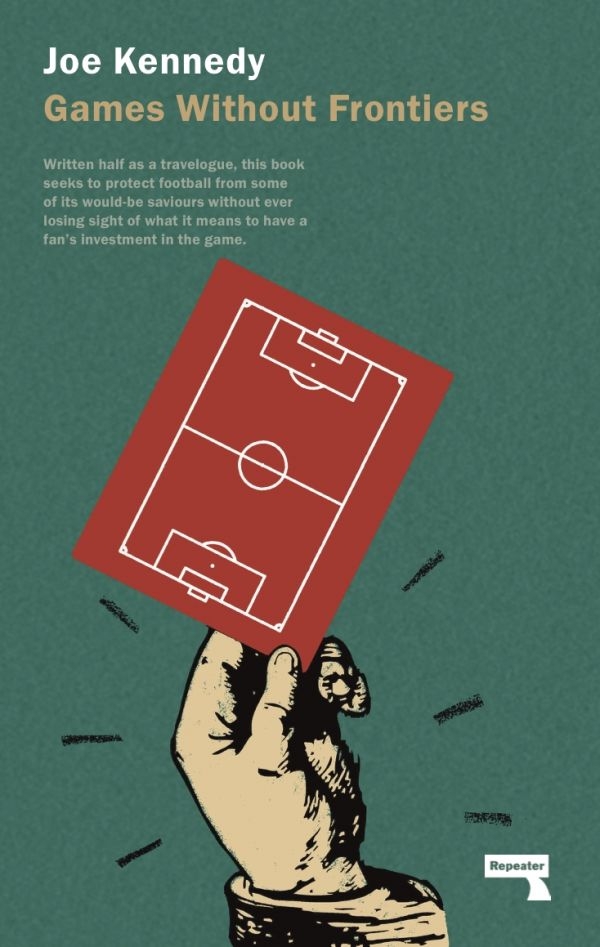 In this edited extract from Games Without Frontiers, Joe Kennedy analyses the relationship between the World Cup, politics, nationalism and authentocracy.

Games Without Frontiers (paperback + free ebook and free shipping to the UK) is currently half price as part of our World Cup sale. His new book Authentocrats, was published last week – buy it here.

“Sport is a battle” is the metaphor we are now required to live by as football fans. The club must survive and prosper at the cost of everything else. However, this formula changes somewhat in international football, where the “need” for victory is often sutured unquestioningly to the national cause. Curiously, this relationship seems to intensify even as the sense of common purpose between clubs and communities fades. This came to light in a peculiarly candid way during the predictable period of recrimination following England’s equally predictable early exit from the 2014 Brazil World Cup. Even before the players had set off for home Harry Redknapp, the geezerish and journalist-friendly cockney who had been passed over for the England manager’s job in 2012 because of a pending court case, turned up in the press claiming that a number of English internationals were in the habit of begging their club managers to withdraw them from the national squad for friendly games. The allegation was stark: that some English players regard playing for their country not as an honour, but as an annoyance. England coach Roy Hodgson and his outgoing captain Steven Gerrard cannily took the sting out of Redknapp’s comments by asking him to name names, but the matter did not drop entirely. Former England striker and current light-entertainment go-to Ian Wright wrote in his column in the Sun newspaper that any player found to have shirked international “duty” without good reason should be required to phone the parents of a soldier killed in Afghanistan to explain their decision to drop out. 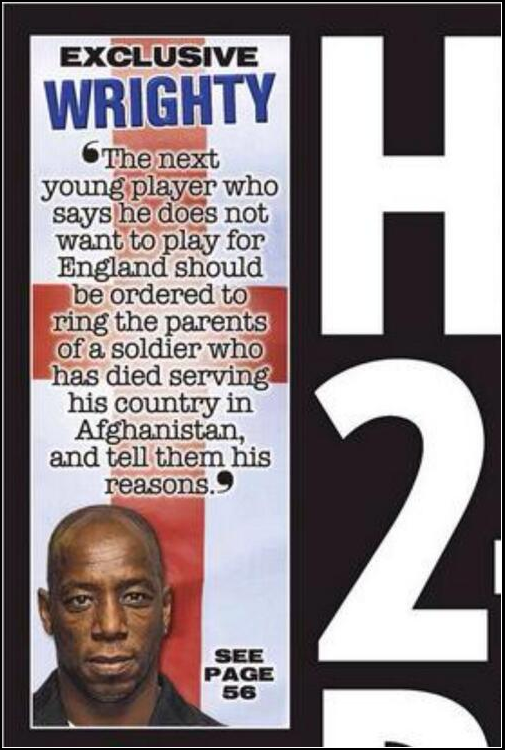 This was imagined on Twitter in plenty of bleakly funny versions of how the transcript of such a call might read. Palpably, the suggestion was a piece of attention-seeking on the part of Wright, who has never, it seems, got over his early-career rejections or his marginalisation in the 1990s England team by more rounded strikers such as Alan Shearer. However, it spoke to something in England’s present-day ideological make-up, namely a resurgent patriotism of symbols which regards Englishness, whatever that might mean, as somehow under threat. The role the football player takes in this set of beliefs is intriguing. Wright was playing to the idea that the default setting for footballers is a patriotic one, that they feel a sense of pride in national symbols which extends beyond their utilitarian, team-bonding value. By linking this version of patriotic obligation to that of the soldier’s, he tacitly insists on the relative unanimity of nationalistic sentiment amongst the working-class communities that both footballers and the rank-and-file military are drawn from.

While one does find the occasional player, such as Serbia’s Siniša Mihajlović or Croatia’s Zvonimir Boban, for whom patriotism is obviously a very real and visceral thing, it seems plausible and even likely that the average international player uses it as a motivational tool, a way of rationalising responsibility to the footballing cause. There’s a ludicrous misrecognition on the part of the right-wingers doing their Queen-and-country act in the stands who think the men on the pitch automatically share their blood-and-soil mentality: footballers, like most sportspeople, tend to focus themselves out of any formal political identification and even, in some cases, vaguer political affects. Presenting footballers as exclusively patriotically motivated is a form of fantasy about working-class politics, which is to say that it suits certain agendas to treat the “proles” as intrinsically nationalistic, thus implicitly turning anti-nationalistic (typically socialist) politics into an illegitimate bourgeois charade. And here lies the true equivalence between footballers and soldiers. The majority join the military because of the route it offers out of poverty, regardless of the narrative which states that they do so through an unmediated love of the patria. This narrative has, both in the UK and the US, a double function, simultaneously masking socio-economic inequality and lending affective “credibility” to those countries’ ridiculous joint-enterprise neo-imperial wars. The linking of footballers to soldiers, then, has as its ultimate outcome an intensification of the militarisation of British society, the same phenomenon, in fact, that we witness when, on the occasions when England score a goal at an international tournament, the footage cuts away to show soldiers watching the game from whichever theatre of operations they have been sent to in the latest stage of the quixotic War on Terror.

That said, the determinations of an intensified seriousness in the visual language of the football media are not limited to society’s broader militarisation. One thinks of the way that various England internationals from the present and the recent past, such as the aforementioned Gerrard, John Terry and new captain Wayne Rooney, seek to present themselves to the nation. The media consensus around the England team emphasises their surfeit of passion, which supposedly exists in inverse proportion to a shortfall of technical ability and tactical nous, but to actually watch an England game is, very often, to be struck by the cowed performances and expressions of players we are supposed to think of as possessed of leonine bravery and aggression. These are rarely performances full of sound and fury but lacking in signification: in fact, they are bereft of all these attributes.

Gerrard’s career is almost precisely coterminous with the Blair – Brown – Cameron era in British politics. In this period, the affective aspect of politics has intensified in counterpoint to a more generalised “waning of affect”: being seen to “care”, or to share in spuriously “common” desires which have replaced genuine collective purpose, seems to be regarded as a far safer bet electorally than possessing either proven competence or the potential for developing it. At the same time, and this is something which takes us once again to those portentous kit advertisements, the tenor of branding has changed significantly, with the governing maxim no longer “this product is great” but “this product is invested with passion”. We’re passionate about conservatories! We’re passionate about crisps! We’re passionate about dog food! However much it cloys with us, it is hard to believe in an individual who is not to some extent invested in aspects of these values, for who would want to be perceived as not caring?

To be regarded as wrongly or cynically motivated is something which footballers must deal with constantly: no wonder Gerrard, Terry, Rooney and the like must seek not only to play football well, but to come across as adequately invested, when they and the rest of their profession are subject to constant slights about the essential worthlessness of what they do. For all the substantial material recompense playing the sport earns them, there are few jobs which invite more clamorous accusations of social irrelevance and metaphysical inanity. This is an issue which comes up every time there is a big international competition. Of course, football becomes unpleasantly ubiquitous during the World Cup, with the main sufferer of this ubiquity being not those who don’t enjoy the game but, counterintuitively, those who do. The unpleasantness is a consequence of ubiquity’s tendency towards dilution, which has the consequence of football being turned into “footie”, that abstracted version which lends itself to all kinds of dismal exercises in masculinist and nationalistic identity formation. Watch the footie on telly last night, mate? Well, no, I went to the football last night. If you spend every weekend of the season following a team, it is pretty easy to come to feel alienated during the World Cup or European Championships, when the sport becomes the preserve of geezerish dilettantes and the themed ladvertising kicks in. It’s at this stage that I usually start to feel sympathy for people who dislike football entirely.

That’s until things turn up like the irritating 2014 meme imagining an alternate reality in which archaeology, rather than football, dominates the media and archaeologists are paid thousands of pounds a week. In the weeks leading up to the World Cup in Brazil, this became the definitive plaint on the behalf of the non-believers, the document tasked with articulating to football fans just what it means to be on the outside of the festivities. Despite the fact that I can imagine what it must be like, for the precise reason that I largely feel the same, for the non-football fan to be bombarded with “footie” for a whole month every second summer, I couldn’t identify at all with the meme.

Let’s think, first of all, about why it is specifically archaeology which replaces football in this ostensibly harmless thought experiment. Why not, say, “shopping” or “military history”? I have no score to settle with archaeology – who would, honestly? – and appreciate the discipline’s substantial, if not politically unproblematic, contribution to the sum total of human self-understanding. However, the field does have certain connotations which are useful in particular forms of self-presentation. Archaeology carries with it an image of wistful past-gazing, of laudable knowledge-foraging, of being the kid who ignored football in the playground because they were too busy digging away in the corner looking for clay pipes or Neolithic man. For all of its fascinations, it is also a realm in which the humblebragging, self-anointed geek enjoys considerable social capital.

In other words, it’s just the kind of thing which appeals to that online constituency Jacques Lacan anticipated when he said that thing about how les non-dupes errent, how the non-dupes are mistaken. That it is the not-fooled, the people who “see through stuff”, who are the most taken-in ideologically, has always had a considerable degree of appeal, but never more so than in the era of internet atheism, an age in which meme factories like the smug I Fucking Love Science pour out quotable rationalism seemingly by the second. Lovely archaeology coming on as a substitute for aggressive, alpha-male, avaricious, irrational (and, though the piece would never dare mention it, largely working-class) football seems to me the kind of notion that really speaks to the aren’t-bees-more-fascinating-than-Jesus, calling-Valentine’s-Day-Hallmark-Holiday, Stop-Kony crowd.

But, lest we fail Practical Criticism 101, let’s go back to the text itself. The point of the meme, remember, is to induce some sort of artificial parity between football and archaeology – to ask us to imagine if archaeology, presented without additional ideological freight, and football, presented likewise, swapped places in the cultural imagination. However, the writer cannot resist the opportunity to start introducing other elements into the equation almost as soon as it has been established, finding subtle ways of embedding value judgements. Here, it’s imagined that archaeologists acquire the same, “worst possible” behavioural traits that the media at large attributes, with consummate dishonesty, to all footballers. The rationale for doing this is not, as it purports to be, to get us to imagine archaeologists on an alcohol-fuelled rampage in Mayfair, but to remind us that football players are uncouth (working-class) louts who provoke “scandal”.

Then there’s another dig. Having hypothesised an archaeologist who would “act” like a footballer, the writer reminds us what an archaeologist would be doing when they’re not up to no good, namely “searching the past for answers”. That’s to say that their professional activity would still be of considerable value, inviting a comparison to the implied “pointlessness” of football. Such purported pointlessness is a classic canard of a hypocritical utilitarianism which locates value (or “point”) in, say, BBC4 documentaries about archaeology or Scandinavian crime dramas, but not in competitive sport. This, I suspect, is an aspect of that classic piece of political equivocation by which utilitarianism is good for the working-class goose, but not appropriate for the middle-class gander, one which seems to be reserved largely for football.