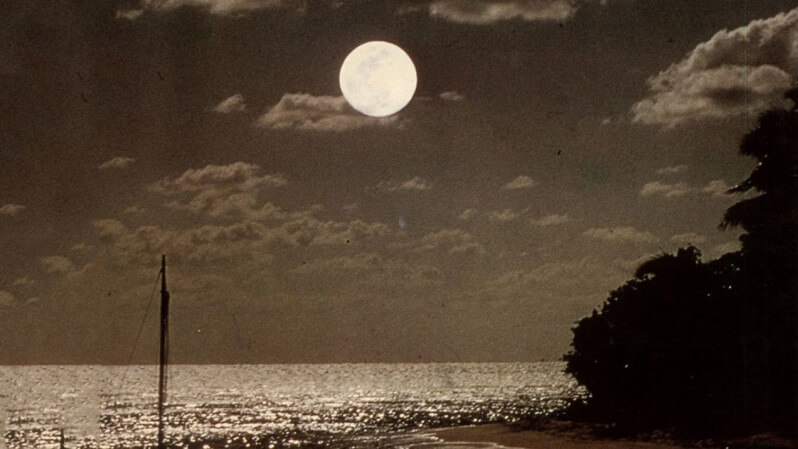 The origin of the luminous phrase ‘killing moon’ is obscure (at least it is to me). Google throws up no reference other than the 1984 Echo and the Bunnymen tune, and a 1994 video game called Under a Killing Moon, ‘the largest of its era’ according to Wikipedia. Elsewhere, there are stray hints. An early draft version of Yeats’s ‘Nineteen Hundred and Nineteen’ begins:

Many ingenious lovely things are gone
That seemed sheer miracle to the multitude,
Changeless and deathless; above the murdering moon …

For Yeats the moon had an occult symbolism, which we can fit into a broader Romantic tradition of viewing the moon as a source of terrible beauty. This was, more or less, the lunar worship famously avowed in Robert Graves’s The White Goddess (1948), which argued that the Romantics—and indeed poets going back into prehistory—celebrated the moon because it preserved memories of an ancient matriarchal society. In Graves’s account, prior to the arrival of male sun gods (Apollo, Christ) European societies paid tribute to a female deity associated with the moon: a ‘White Goddess’ at once ‘terrible, beautiful, inspiring, and destroying’. For Graves, all true poetry must pay homage to the Goddess and her ultimate dominion over the creative soul:

The reason why the hairs stand on end, the eyes water, the throat is constricted, the skin crawls and a shiver runs down the spine when one writes or reads a true poem is that a true poem is necessarily an invocation of the White Goddess … whose embrace is death.

Graves’s theory was highly influential, and for better or worse we can see it impacting on post-forties poetry in all kinds of ways (the life and work of Ted Hughes and Sylvia Plath, both of whom were White Goddess devotees, is a notable example).

While I doubt that Ian McCulloch had Graves in mind when he sat down to write ‘The Killing Moon’, it seems clear that the wider, ancient poetic tendency of exalting the moon’s dark majesty and sway over human fate is somewhere behind the lyrics of this incredible piece of music:

I’m not trying to shoehorn this pop lyric into an orthodox study of literary influence. All lyrics set to music (from Campion to Beyoncé) are different in texture from non-musical poetry—they are less dense and allusive, and so do not lend themselves to the techniques of close reading established over the last century or so of literary discourse. But I think we can probably agree that this sort of writing is nonetheless something unique and lovely. Like the best pop lyrics, it emerges from the moment when adolescent simplicity and sincerity are perfected with a sudden flash of mature self-awareness—a Bildungsroman in a nanosecond.

More concretely, as mentioned, we can see literary presences filtering through here to a work of art that is not self-consciously literary. Even if McCulloch was not as versed in the poetic canon as someone like Ted Hughes, he was writing in the early 1980s at a high watermark of popular literacy: a time when certain historical conditions (generously funded higher education, a strong counterculture, widespread intellectualism, no internet) meant that literary pop songs happened as a matter of course, growing organically out of the social-democratic soil, as it were. ‘The Killing Moon’ with its evocative title and lyrics—not to mention its sophisticated melody and arrangement—is one of the greatest and most successful translations of the Romantic literary aesthetic into the medium of the late-twentieth-century pop song. And it manages the feat without even trying.

But what, after all, is the song about? The arresting chorus hook (‘Fate / Up against your will / Through the thick and thin’) doesn’t need much decoding. Indeed—and again, note the effortlessness—apparently this fragment came to McCulloch full-fledged in a dream, just as the melody of ‘Yesterday’ was magically gifted to another Scouse Romantic back in 1964. We don’t need to follow McCulloch’s claim that the lyric arrived direct from God to appreciate the simple profundity of lines like this: will and fate in an endless tug of war, with the earth of life churned by the footfall.

Of course, this is at bottom a song about a death wish, or perhaps just death (remember the White Goddess, her embrace):

Perhaps you’ll forgive me if I move from the critical to the personal to attempt to understand the power of these lines. I don’t know why, but since (belatedly) discovering this song for the first time over the last month or so, I haven’t been able to break its dark spell. In echo of its composition, I’ve woken up many times in the middle of the night with the chorus hook ringing round my brain. Life for me is good right now, perhaps better than ever. But there is something not quite right in the night sky.

I cannot work out what is meant by the final couplet of the chorus of ‘The Killing Moon’, a song released in the year I was born: ‘He will wait until / You give yourself to him’. Does God, or the Goddess, wait mercifully for us to decide we have given up on life? And being so overshadowed by death, how are we to muster will, hope, energy in the meantime? Perhaps we are living in the killing time, sliding passively towards decay, with ingenious lovely things disappearing around us every second. Like so many others, I am finding it difficult to see a way forward right now. Political options have narrowed, the counterculture is gone, and the wisest man I knew took his own life at the start of the year. I can acknowledge the light of the morning, and savour how it makes my baby son smile. But you must believe me when I say that lately I have felt haunted by the killing moon.

Alex Niven is a Repeater editor, writer and lecturer in English Literature at Newcastle University. He is the author of Folk Opposition, The Last Tape and Definitely Maybe (33 1/3), and is currently editing a book of Basil Bunting’s letters for OUP. He blogs at http://thefantastichope.blogspot.co.uk.