Rodrigo Aguilera is a Mexican-born, London-based professional economist who has worked for Chatham House and The Economist Intelligence Unit with a specialty in economic and political risk analysis and forecasting, particularly on Latin America. He has a bachelor’s degree in economics from the Universidad de las Américas – Puebla in Mexico as well as a master’s degree in Social Policy and Development from the London School of Economics. Some of his other scholarly interests include twentieth-century history, defense and security issues, international economics and Latin American current affairs.

He is a frequent speaker in the UK on Latin American issues (particularly on Mexico) in both academic and business forums, and has been featured in major English-speaking and Latin American media. His writing has appeared in the Huffington Post where he previously had a contributor column and more recently in the London School of Economics LSE Blogs for Latin America and the Caribbean. He also maintains a personal website, Reasonability.org (a cynical thinking blog). 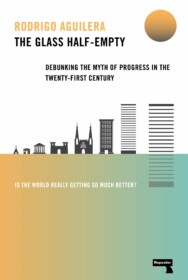 The Glass Half-Empty: Debunking the Myth of Progress in the Twenty-First Century