You are on your annual Big Bognor Weekender. That is to say, you are at Butlin’s, a microcosm of England at large, a Wonderland of broken fruit machines and ice-cream-splattered dance floors. It is evening. The redcoats are out having a cig. Your cousin has passed out on the karaoke machine, but (no fear) the caretaker will sweep him up at the end of the night. There is a fly in your beer. The rest of your family are tending to bumper car injuries or making plans for tomorrow. They are going to have their palms read down at the seafront by a call-centre worker in a neon tracksuit who calls herself Madame Obscura. You decide to go back to your chalet and, as you settle into bed, you find a cassette tape and player under your pillow. Mysterious. You had not noticed them before. Alongside them is a letter. You read it:

England – the land is quaking. The plates of mud still shift to underhand lullabies sung decades ago by long-vanished mothers. The scant melody of a voice is in the ash tree, seemingly dissipating, then returning, chanting about how much it hates Plymouth Argyle FC. The last-order rapture of the pub chorus. The ancient faux-princely orchestra. The hated national anthem (it should be ‘Jerusalem’ instead, in my opinion). How many rhythms can you find in your spare room before the Bedroom Tax comes for you?

Here is a playlist to make the Bognor clouds beam – for you to tap your toe to, or sternly do your ironing to, depending on what type of listener you are. The songs on this playlist, more often than not, can be validly mapped, like time-stamps, on the socio-cultural and political landscape of England. They remain most significant to me, however, due to my personal artistic and emotional responses to them (hence why I have also included a song of Italian origin and another of American origin). I listened to them all whilst writing ‘A Small Man’s England’. I imagine they rubbed off on me during the process. Perhaps, at times, I took their melodies into the text with me and laid them out on the heaths, for the people who populate my book to go and listen to when anger can be left alone for the night.

I place this letter beneath your pillow, to serve as a prelude to the songs ahead. Perhaps leave it behind for the next holiday-maker, to distract them from the distant ululation of the Cheryl Cole tribute act, or from the mysterious red stain on the chalet ceiling (yes, I noticed it too).

From Tommy, to the reader

Shining steel tempered in the fire,

I’ll chop you down like an old dead tree

Written in the immediate aftermath of the Second World War, ‘Dirty Old Town’ is the rolling dreamscape of the late-industrial working class. It is the last word of the quasi-political folk and working men’s clubs of the mid-century (MacColl’s “axe” is that of communism, hacking down the “dead tree” of capitalism). The song reverberates to the present, passed down as an heirloom from generation to generation. It is hummed by grandads as they scrape dripping from the oven dish. It is carried around in pockets and emptied out on sticky pub tables. In the landscape of individualistic neoliberalism, ‘Dirty Old Town’ continues to remind us of a class consciousness and collectivism that has become evasive but not impossible to tether. Despite its many covers, from that of ‘The Pogues’ to that of ‘The Specials’, MacColl’s original version, sung with actress Peggy Seeger, his wife, remains the most vivid to me.

“Liverpool can be a lonely place on a Saturday night – and this is only Thursday morning”. This is Roger McGough’s touch on the opening of the 1968 film Yellow Submarine. As the cartoon Ringo Starr delivers the line, he stands beside a cheerless wall on the ironically named Hope Street. The psychedelic fantasy of the band’s voyage into Pepperland, which occupies the majority of the feature, stands in stark contrast to the materiality of the lustreless post-war Merseyside in which the story begins. The radiant escapism of 1960’s counterculture is all well and good, however it is the focus on the point of reality that the characters are departing from that interests me.

‘Eleanor Rigby’, and the cutting from the film that accompanies it, predict the solitude of the neoliberal subject over a decade before the commencement of Thatcher’s governance. Fringe figures such as Father McKenzie and Eleanor herself can populate entire modern cities.  They are akin to the people that inhabit the in-between spaces of the semi-conscious nation in A Small Man’s England – never quite realised in their entirety, familiar but ultimately unknowable, passing in and out of existence, carried away by time, and finally leaving no trace.

Imported from Chicago and re-released in Britain by XL Recordings in 1997, the Live Garage Mix of ‘Gabriel’ (or ‘Gabrielle’ as it was originally called) is a rave-spiritual. The celestial trumpets hover over the aerial of a London high-rise. Billowed from the window of a pirate radio station some twenty years ago, they refuse to evaporate into night. This mix is tracksuit bottoms tucked into socks, a stolen Burberry cap, an NHS gold tooth. I used to listen to ‘Gabriel’ on my daily snow-walk up Old Kent Road when I first moved to New Cross. It is a winter song to me. I dig it out every year.

Fast-forward to the noughties, for an equally cosmic-electronic recommendation. South London’s own Burial produces a single that never ceases to make its way around basement raves, like an amateur bouncer with a firm lip and a photo of Lenny McLean in his wallet. A tribute to UK Garage, the scurry of drums, the time-stretched vocals, and the spectral thematic which characterise ‘Archangel’ and the album it is lifted from make for a fluid tenebrous soundscape.

In A Small Man’s England I state that when I think of this country, I think of the working class. My England is one of a shared experience and understanding of difficulty, a landscape of small collective triumphs over the hostilities that the state presents to us. My writing seeks to navigate the push and pull between the antagonistic England of the past and present, and the unwavering solidarity of the Common England we must create.

Paul Weller’s Mod ballad portrays an England worth returning to, albeit for romantic reasons; an appreciation, somewhat, of amiable, unimposing working-class familiarity and the quiet intimacies of ordinary communities.

It seems fitting to end the playlist on this contemporary yet classical Italian composition. I, and many others I know, first felt stirred by ‘Berlin Song’ during the closing scene of ‘This Is England ‘90’ (I feel like it may have been in ’86 and ’88 also, but in the finale of the series it is particularly compelling). ‘Berlin Song’, to me, therefore, seems synonymous with a last dance, a contemplative final touch.

As celebratory as it is melancholic, it is a piece you might find buried beneath the snow, a piece you would keep concealed on your person, to uncover only on quiet nights, when everyone has gone out, and you can sit with it for a while. ‘Berlin Song’ realises the occasional moments of solace, bumped into as chance encounters, on a torn and fractured terrain. It’s bloody gorgeous. I leave it with you. 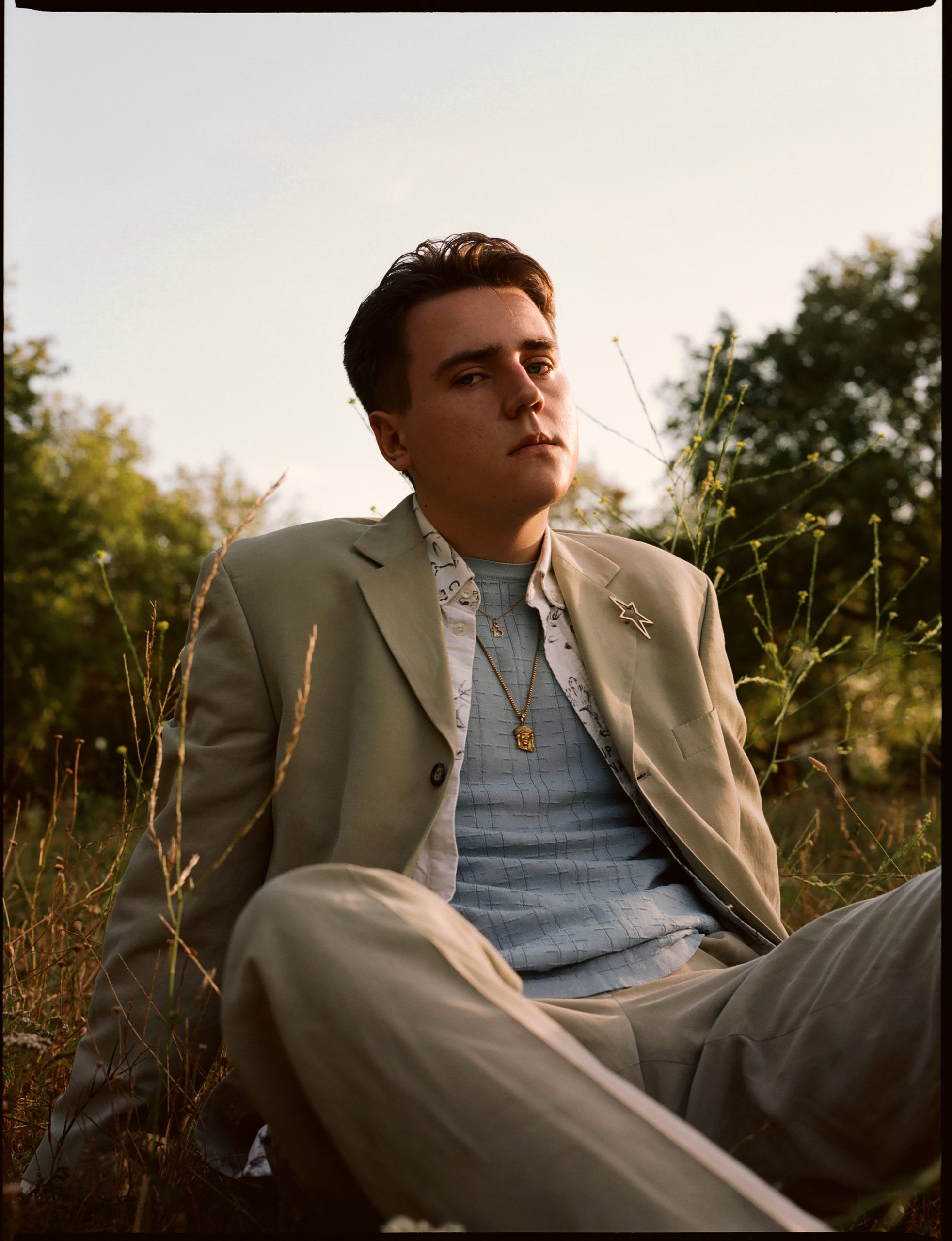 Tommy Sissons is a poet, writer and educator based in London. He is the literary editor of GRASS Magazine, a publication specialising in the promotion of working-class creatives. Sissons has toured his spoken word poetry across Europe and delivered talks on widening participation in education and the arts at a number of academic and cultural institutions, including the V&A Museum and Sheffield Hallam University. Tommy’s debut book, A Small Man’s England, published with Repeater Books in January 2021, and can be purchased here.