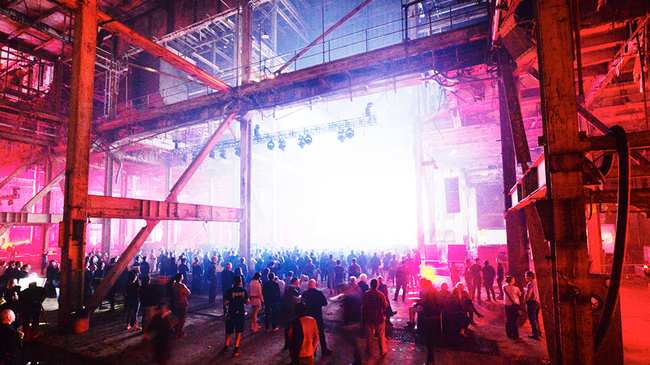 The main Repeater events were a Mark Fisher reading group organised around the forthcoming collection k-punk: The Collected and Unpublished Writings of Mark Fisher (2004-2016), a panel on the aesthetics of field recordings with Paul Rekret, and a talk by Ryan Diduck on his book Mad Skills.

In his review of the festival for Cult MTL, Ryan Diduck described it as having:

unimpeachably cool programming, airtight organization and access to some of the most unconventional and remarkable venues, including an ornate synagogue in the Jewish District, a decommissioned salt mine and a sprawling Soviet-era hotel called the Forum.

You can also check out our full range of fantastic music titles below:

Advertising Revolution: The Story of a Song, From Beatles Hit to Nike Slogan
Alan Bradshaw and Linda Scott

“… a fascinating study of a key episode in our recent cultural history.” – Jeremy Gilbert, Professor of Cultural and Political Theory at the University of East London.

Red Set: A History of Gang of Four
Jim Dooley

“The definitive history of Gang of Four, along the way explaining why their music meant so much for the embryonic leftwing ideas of their dedicated followers…” – openDemocracy

“Do you like electronic music and Marxism? You’re in luck… great for gearheads and anyone who resents the rise of black-boxed control mechanisms.” – Pitchfork

“… as a knowledgeable and thoughtful overview to a scene which is now more accessible than ever, this serves as a perfect introduction.” – The Wire

Under My Thumb: The Songs that Hate Women and the Women Who Love Them
Rhian E. Jones and Eli Davies

“…a book that arms us with the clarifying arguments we need in this moment.” – Jessica Hooper, Frieze

Down With Childhood: Pop Music and the Crisis of Innocence
Paul Rekret

A Memoir: From Oran to Marseilles

The Music of the Future

“Robert Barry’s excellent, exhilarating, free-ranging study relishes, and invites the reader to bask in, its sea of scholarly research and the idiosyncrasies and connections it yields.” – David Stubbs, Review 31

“This book rightly asks a lot of the audience and in exchange delivers a lot back to them – just like The Holy Bible.” – Guy Mankowski, 3am Magazine

“… skilfully maps a range of critical perspectives on post-punk, particularly those that fit into the vein of Capitalist Realism.” – Guy Mankowski, 3am Magazine

Smile If You Dare

“As well as a keen critical edge, it is equipped with an undisguised mad love for the source material, a sense of passionate abandon induced by the tragic/ecstatic synth-pop that pours out of the speakers.” – The Wire